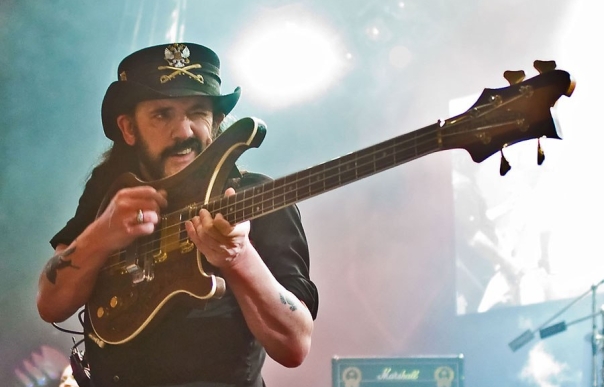 There are few bands that represent the rock n roll spirit more accurately than Motörhead, and it’s not hard to see why. But it can be hard for the casual listener to understand just what the big deal about was; after all, he’s not the best bassist in the world and his voice isn’t all that outstanding either. While all that is undeniable, there are some factors in play that are not usually considered, but were nonetheless important contributors to his rise to fame.

To see this, consider his past. Lemmy started out as Jimmy Hendrix’s roadie (see: We Are The Road Crew) and took advantage of the time to learn guitar. After a short time in a couple psychedelic rock bands in England, he joined Hawkwind as a singer and bassist. Hawkwind was where Lemmy’s unique playing style originated: he was a guitar player and had never touched a bass before, but one show the bassist didn’t show up and Lemmy volunteered to give it a shot. He picked up a bass and learned it on stage. He played it with no respect whatsoever for how it was intended to be played; unlike a respectable bass player, Lemmy plays multi-string chords with outrageous amounts of distortion, just like a guitar, and the result is a unique playing style unlike anyone else’s:

He was kicked out of Hawkwind soon after due to his uncontrollable drug use and formed Bastard, which was later named after the last song he recorded with Hawkwind, Motörhead. It was with Motörhead that he got significant mainstream success, and acquired some of the traits that he is now remembered by, such as his raspy voice, and near-superhuman tolerance for alcohol.

Exactly how Lemmy became the legend he is today is subjective though. Motörhead made great music, which was helpful. Part of it was his unmatched bass style for sure, complimented by his unusual voice and mic position. What sets Lemmy apart from other musicians is that he kept it up for so long. In addition, drinking reportedly over a fifth of whiskey with multiple shots of speed (crack cocaine mixed in heroin, FYI) every single day got him a bit of a reputation. His alcoholism was so extreme it was difficult to interview him after his current hangover passed but before he was working on the next one, and when his manager wanted him to get a blood transfer so he wouldn’t drop dead, he was denied and told that his blood was so toxic it would kill someone. Despite all this, he managed to live to 70 and died of cancer before anything else, performing live just two weeks before his death. He did what he wanted all his life until he absolutely could not anymore, and that, if nothing else, earned him a place among the stars of metal and rock n’ roll alike.

Lemmy’s reputation is not a result of being the best singer or bassist the world has seen. His legacy was carved not because of how well he did what he did, but that everything he did he did in his own unique way and however the hell he wanted, from the drinks to the mic position, and despite living fast all his life he just refused to slow down until the end.

Elvis may be the king, but Lemmy was the god of rock n’ roll.

Battle jackets and vests are now a very common sight at metal shows, or even just on the street. They are an iconic and instantly recognizable aspect of rock n roll culture. However, how they were invented is, surprisingly, not common knowledge. Even people who have them may be surprised that they have more of a story than just looking cool. 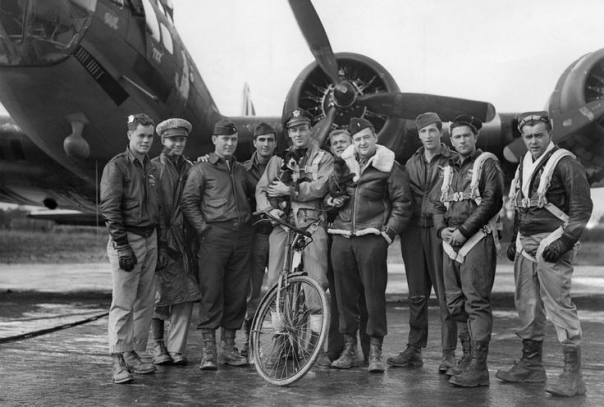 Battle jackets were initially invented in WW2, when Air Force pilots would decorate their flight jackets with squadron insignia patches, and later pop culture icons. After the war ended, many pilots got into motorcycling for the excitement and speed. They kept their flight jackets to use as motorcycle jackets, since they offered protection against crashes, but sometimes sawed the sleeves off, as they could be restricting.

They continued to decorate their jackets with logos of clubs, gangs, and rapidly developing subcultures as they began to evolve in the 50s. Since paint flakes off of leather easily under rigorous use, they began to sew patches onto their jackets instead. Sewing denim is a lot easier and faster than leather, so denim jackets were used as well alongside leather.

These clubs and gangs did not usually get along, which caused them to be affiliated with street fights, mass brawls, extreme devotion to their club, and a violent appearance to the general public. Take the two most widespread British subcultures for example: the rockers with their Triumphs and Harley-Davidsons and gangster attitudes naturally opposed the mods with their hideous Italian scooters and an alarming obsession with lights and mirrors. 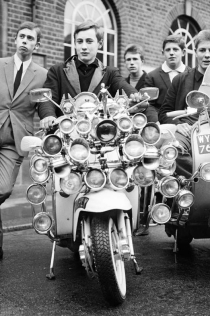 As the 60s arrived and rock n roll made its mainstream breakthrough, it fit the picture perfectly. There were two very different types of music-inspired jackets that came together to spark the rise of the modern battle jacket.

The first was that the gangsters found the rebelliousness of the new genre and it defying societal norms appealing, leading them to decorate their jackets with the bands’ logos and album art. The other was the Woodstock era hippie culture, who had a radically different ideology but with surprisingly similar motivations: mostly, free self-expression and defying the expected norms. 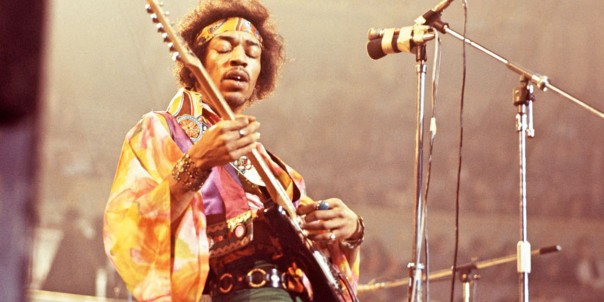 The two branches came together as the hippie music era dawned into a new wave of rock n roll: the various genres and subgenres of the 70s. Classic rock, punk, and heavy metal appeared almost out of nowhere, and as a result of the sudden change a lot of the new bands kept the fashion, which was naturally copied by the fans.

Punks were the first non-gangster group who started customizing their jackets with band logos, and they were quick to invent the addition of metal studs to their outfit as well. The existence of modern metal jackets is largely the unintentional consequences of punk fashion in the late 70s–an influence that some metalheads try to forget.

There are two people who brought denim and leather, respectively, over from the punks to heavy metal. Judas Priest is one of the greatest metal bands of all time, but next to the sound, they also invented a now-classic new look by bringing head-to-toe leather into the genre. Rob Halford’s signature move of riding a motorcycle onto the stage may also have something to do with it. The denim was brought over by none other than Lemmy, who smashed his way into metal somewhat unintentionally and very drunkenly toward the end of the 70s.

With battle jackets in punk and metal, it inevitably seeped into the middle ground, traditional hard rock, as well, and eventually covered the entire musical spectrum of rock n roll. Design aspects from specific genres mixed into one. Modern battle jackets are common among any genre related to rock n roll, from grunge to black metal.

Making your own won’t take too long either–just get a cheap denim jacket, optionally hack the sleeves off, and sew patches on in whatever order you get them in. 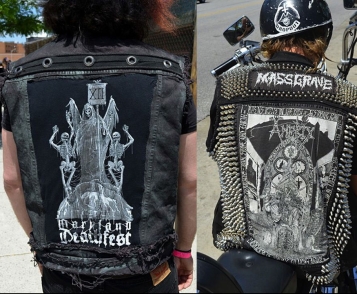 Some genres seem to appear out of nowhere, but others can be traced to very specific roots, artists and dates. The latter type predictably causes some controversy as to what is actually a new genre, and what is just a fancy twist on the old one. Metal is one of these; it comes directly from hard rock and rock n roll, but it’s exact beginnings are a little fuzzy. It’s come such a long way since then though that it is hardly recognizable as one genre anymore; modern ‘core is hardly comparable to the 70s glam swagger that started it all. But when it comes to finding the very first metal bands, there are a few that come to mind.

Obviously, there are much more; these are just the most influential. Metal would not have been possible without dozens of other bands in the 60s and 70s, but these are the bands that kickstarted the genre and made the rest possible.

Led Zep is not exactly a metal band. Their most well-known song, Stairway to Heaven, may be a lot of things but it is hardly metal, and their bluesy hard rock sound was not at all unusual at the time. However, as the 70s progressed, their sound only grew heavier, eventually heavy enough to inspire future metal bands and possibly to be considered metal themselves. The definition of metal music has changed over the decades, but in the mid-70s, Led Zep fit the picture.

British prog/psychedelic hard rock outfit Deep Purple seemed like an unlikely band to kick off a genre like heavy metal, but here they are. Their sound may have been bluesy or psychedelic at times, but at the end of the day it was heavy as well, and at the time that stood out. Their unusually heavy guitars are what earned them their place by Led Zep and Black Sabbath in what is now known as the “unholy trinity” of British proto-metal.

You probably weren’t expecting to find Motorhead on this list. They called themselves rock n roll, and for a while that worked out. They lived the rockstar life like no one else–leather, whiskey, and amps cranked to 11. They never cared what the world thought; they just played their music regardless of what people called it. But given their sound from the very beginning, it was no surprise that people started calling them metal as soon as the word had a meaning in music, and while their sound remained relatively stable, the labels changed from hard rock to heavy metal to early thrash metal. While the accuracy of those labels is debatable, Motorhead remains one of the most underrated and overlooked bands to influence the beginnings of metal to this day.

Black Sabbath and Ozzy Osbourne. Sabbath is the first band to be considered actual metal, and their influence is beyond measure. The song “Black Sabbath” is credited with inventing all of metal and while one song couldn’t possibly start such a diverse genre singlehandedly, it’s album, ironically also called Black Sabbath, was the first album to be considered legitimate metal. Some of their other songs, such as Iron Man, Paranoid, War Pigs, and Children of the Grave, together were where it all began, followed up by Crazy Train and other songs by Ozzy and his new guitarist Randy Rhoads. The band’s influence on the future of metal is unmatched by all of the others combined.