Gurlanins originally appeared in Karen Traviss’s increasingly famous Republic Commando novels, set in the Star Wars Expanded Universe. They are the only native sentient species of the planet Quilura. They are best known for their neat little feature: shapeshifting. Their natural form resembles a large, black canine, but they can morph into not only other living beings, but even inorganic substances. If they choose to, they can become invisible to infrared and thermal sensors, and can mask their Force signatures. How do they manage this? I have an idea.

As you know if you’ve read the books, Gurlanins can communicate telepathically from different sides of the galaxy. Their minds are somehow linked. When they morph into nonliving objects, they have no organs to keep them alive, but if my theory is correct, then they can use the fact that their minds are linked, and keep each other’s minds alive when their bodies are unable to support them. You can think of individual Gurlanins as cells, and the species as a whole as a multicellular being. Any one cell would die on its own, but relying on each other, they can all stay alive.

It sounds unlikely, but I can’t think of a better explanation. What do you think? 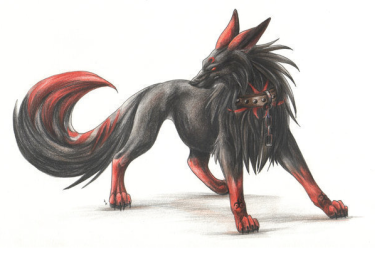 Ralph McQuarrie was hired by George Lucas to create concept art for Star Wars. He is responsible for the look and feel of A New Hope, but his influence didn’t stop there. The Force Awakens used many of the pieces left over from the original trilogy, and even the prequels, though Doug Chang was hired for The Phantom Menace.

Here are the 12 best pieces of Ralph McQuarrie concept art:

Apparently this…monster…inspired Yoda’s look. It’s hard to tell whether the ewoks are small or the monster is big, but it’s cool either way.

This is not the first drawing McQuarrie made of ATAT walkers, and probably not the most iconic either, but it really captures the feel of the walkers. The unused creature is a bonus. The rocks to the right are in a shadow–maybe there is a cave. It would make sense to run into a cave where the walkers can’t follow.

The cockpit was the only part used in the film. The design may have inspired the Tantive IV.

Despite what they did to it in the movie, this picture makes it seem like a architectural wonder and a really expensive high-security capitol building. Maybe it would be if Vader and his sadistic thugs hadn’t holed up there. 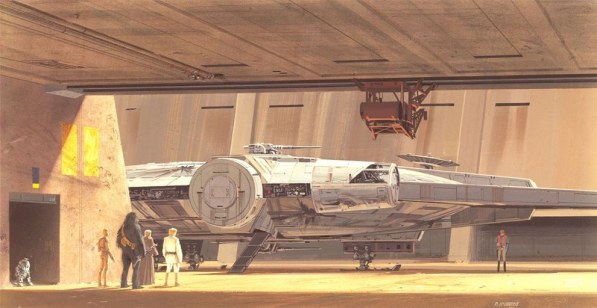 this is the version McQuarrie made after Lucas told him what he liked and didn’t like about the old one. It really captures the feel of the scene where it’s introduced.

This was before the harpoon idea, apparently. The AT-AT looks even more menacing now that there is nothing else in sight. 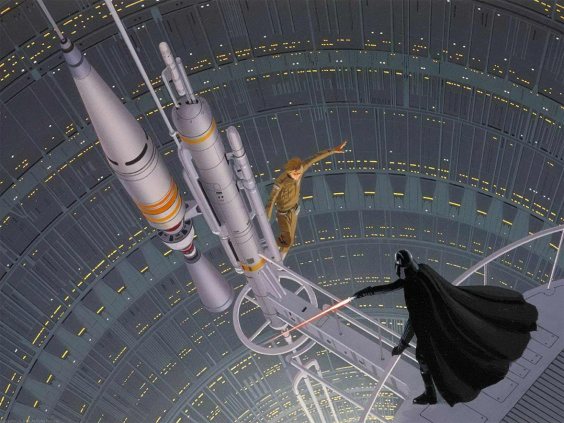 This is easily the most iconic Star Wars scene. It’s also a pretty convincing futuristic alien cityscape given that it was made in the ’70s. And it’s just as dizzying as it was in the movie.

C-3PO and a short version of R2 (inspiration for Chopper?) can be seen at the far left, along with a Tatooine sandtrooper. In the center, what would later become Han Solo is facing an idea for Greedo with Nightcrawler’s triangle shaped* tail, holding Padme’s gun. There is also a creepy owl sitting at a table.*

*   /\ Illuminati confirmed. Whoever they are, McQuarrie knows something.

It’s hard to imagine that 3PO was ever this graceful, or that R2 walked instead of rolling (look at the footprints. They’re not continuous). But apparently Tatooine has two moons as well as two suns.

This drawing inspired the landspeeder, C-3pO, Zam Wessel’s sniper rifle, the dual sunset scene and the Mos Eisley spaceport, while setting an empty, desolate scene with seemingly little of interest. It makes a good desktop wallpaper on a computer.

In one picture, McQuarrie invented the two most iconic starfighters and the Death Star trench run. The design for the original X-wings were slightly altered because of the limited budget for the film, but The Force Awakens incorporated it for the new T-70 X-wing. 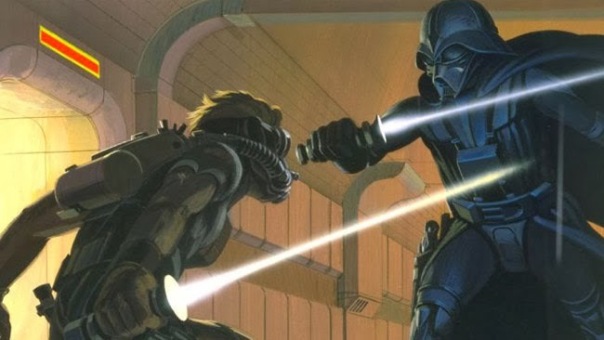 This is one of the first drawings McQuarrie made for Star Wars. It’s also one of the most famous, as it inspired Darth Vader’s look and invented the lightsaber.

Based on the pictures above, can you tell which one of these is from Ralph McQuarrie? 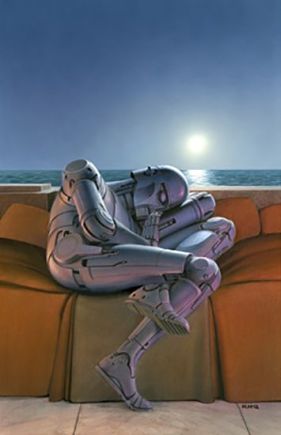 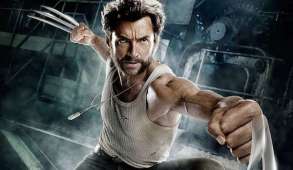 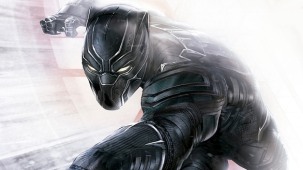 Weapons: Wolverine has his claws and that’s it. Black Panther also only has his claws. Because of their different types of claws, they have very different fighting styles, but neither has a clear advantage.

Skill: Both are very skilled fighters, trained in countless forms of combat. As of yet, Black Panther only has one movie, so he hasn’t had a real chance to prove himself yet. We don’t know the full extent of his skill, but he can definitely rival Wolverine.

Mindset: Wolverine knows no limits when it comes to fighting. Black Panther will stop at nothing to avenge his father. Both are passionate about what they believe. Both “use the dark side”–they use their anger to make them stronger.

Use of surroundings: In the finale of X2: X-Men United Wolverine proves that he can use almost any environment to his advantage. Black Panther has the right stuff, and in future movies there is no doubt he will demonstrate similar ingenuity.

These are two excellently matched heroes, but there is a winner. While neither’s weapons can harm the other, Wolverine is immortal. Black Panther can be killed. Wolverine can keep fighting forever, but eventually Black Panther will die. To top it off, Wolverine has been around for a while, and Black Panther is relatively new and inexperienced. The fight would be long and bloody (as all of Wolverine’s fights are), but eventually Wolverine would come out on top, with brute force if nothing else. 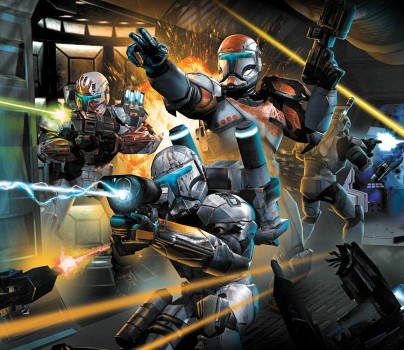 I recently finished reading Karen Traviss’s famous Republic Commando novels, and the fourth book, Order 66, raised an interesting question: how much did Jango know about what was behind the war when he sold his genes to the Kaminoans?

Attack of the Clones fooled fans into thinking that Jango sold his gene template solely to collect his five million credits and Boba Fett, then betrayed the Republic by working for the Seperatists. We all thought that he was a money-motivated rascal who valued cash over culture (the correct Mando’a term would be dikutla shabuir, I think. Comment if you know what that means…) But did he know something more? More precisely: did he know who Palpatine was?

Mandalorians and Jedi don’t have a very good history together. They worked better with Sith, and regarded Jedi as arrogant scumbags. Jedi slaughtered True Mandalorians in the Battle of Galidraan, leaving only Jango alive, so he has plenty of personal hate for the Jedi as well. So he wouldn’t even have flinched when he discovered that the Republic had a Sith mastermind at its head.

If Jango had known the whole story all along–Palpatine arranging the war and controlling both sides anonymously–he probably wouldn’t have had any objection to selling his genes for a low price. He would have known that Palpatine would use the army to get rid of the Jedi at some point, and being a Mandalorian, that gave them a common enemy. Thus, it would be his interest to help create an army powerful enough to take down the Jedi Order.

The death of the Jedi by a Mandalorian army, even if they are only clones of a Mandalorian, would the ultimate way for Jango and the entire Mandalorian culture to get its revenge on the Jedi for what they did on Galidraan. In fact, that may have been another reason he trained the original one hundred Alpha ARCs–the most lethally trained men in the entire army–himself, and hired 90% Mandalorians as Cuy’val  Dar (“those who no longer exist,” the Mandalorians who trained the clone army). We don’t know a lot about most Cuy’val Dar, but Jango, Kal Skirata, Walon Vau and Rav Bralor trained their men as Mandalorians, and the others probably did, too.

So Jango walks away with a bit of cash and a cloned heir, after single-handedly catalyzing a war and producing an army to kill the Jedi. He was patient–even after he died at the hands of a Jedi.

Boba was furious when Mace killed Jango, but he after Order 66, he must have realized that his father didn’t fail, but instead had had his vengeance and achieved what no other Mandalorian had ever done. 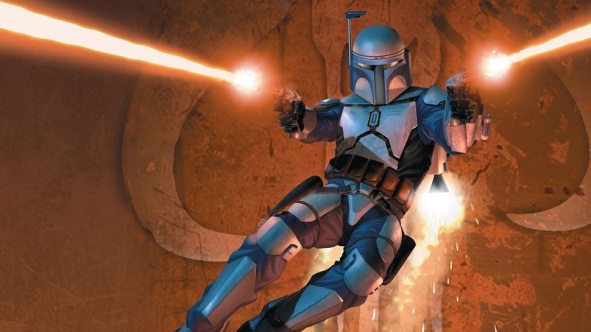