Iceland is full of many different types of scenery. Despite being a relatively small country, a one or two-week visit will hardly scratch the surface of the scenery to be found.

If you’re looking for waterfalls, take a look at Gulfoss, Dettifoss, Seljalandsfoss, Goðafoss, Hraunfossar, and Glymur. Check out Eyjafjallajökull, Keilir, Hekla, Landmannalaugar, Hvannadalshnúkur, and Kirkjufell if climbing mountains are closer to your style. If geothermal lakes interest you more, check out the Blue Lagoon, Lake Myvatn, Viti, Grjótagjá, and lakes in Landmannalaugar.

The Golden Circle route (which can be driven around, but tours are offered too) is one of the most popular areas to visit. It begins in Reykjavik and takes as long as you want it to, from six hours to a full week. It includes Thingvellir National Park, Gullfoss Waterfall, and the Geyser Geothermal Area, but detours can be made to include the crater lake Kerid, Langjokkul Glacier, the Thjorsardalur Valley, and the historic town of Skalholt.

There are reasons to visit other than the scenery, too. Aurora Borealis, or the Northern lights, is visible most clear nights between September and April. In the summer, milder temperatures of up to 70° F (22° C) draw in visitors wanting to explore the island without heavy winter gear. Icelandic seafood is known to be excellent any time of year (although some traditional Icelandic food is not usually appreciated by tourists). 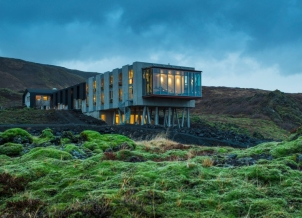 Reykjavik is a popular place to stay due to the abundance of tours that start there, but there are hotels available in central Iceland, which provide more proximity to day-trip destinations. Check out Sandhotel and Fosshotel in Reykjavik, Hotel Ranga and Hotel Vík in the South, Ion Adventure Hotel (pictured) in the Southwest, and Fosshotel Myvatn in the Northeast. Exotic and unusual hotels are also available in Iceland, from log cabins and igloos to the famous Bubble Hotel that’s actually more comfortable than it looks.

There are a lot of great places to go–too many to choose from if you have limited time there. These are the 12 best must-see places to visit in Iceland: 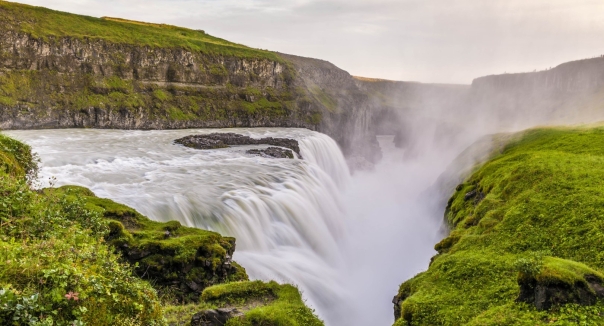 #12: Gullfoss Waterfall. Gullfoss is considered one of the most beautiful waterfalls in Iceland, and its an essential part of any trip to the South of the island. It’s a part of the Golden Circle route, so a lot of tours include it.

#11: Kerlingarfjöll. This mountain range is one of Iceland’s most interesting, despite being basically the middle of nowhere. Huts are available to rent, but camping is more common.

#10: Reynisfjara Beach. Found near the village of Vik in southern Iceland, Reyisfjara is known around the world for its black sand and unusual rock formations. It’s only a few hour’s drive from Reykjavik.

#9: Asbyrgi Canyon. Asbyrgi translates to “shelter of the gods” in Icelandic, and the place has an interesting legend behind it. In addition to a great view, there are many hiking trails around the area. 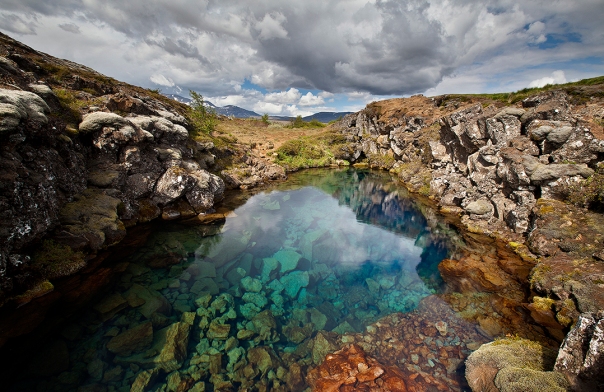 #8: Thingvellir National Park. In this park, the most famous part of the Golden Circle tour, you will find the Oxara waterfall and the Nikulasargja Gorge (aka Money Gorge), along with other photo-worthy destinations.

#7: Lake Myvatn. While its pretty far North from Reykjavik, it’s worth the drive if you have the time. There are plenty of geothermal lakes that offer a cheaper and less crowded alternative to the famous Blue Lagoon, as well as geothermal caves and underground lakes to swim through.

#6: Landmannalaugar. The most scenic parts difficult to access and there are not many services to be found, so you need to pack your own food, gasoline, and camping equipment. But once you’re there the lava fields, colorful hills, and striking peaks make up for the inconvenience.

#5: Hornstrandir Nature Reserve. Located in the Northwest tip of Iceland, the Hornstrandir Reserve is an extensive nature reserve that is open for hiking and camping, though a guide is recommended.

#4: Skaftafell National Park. There are many things to do in Skaftafell. The Crystal Cave is a popular ice cave worth seeing if being under several dozen feet of shimmering blue ice doesn’t give you claustrophobia. Tours of the glacier are also available, with the right equipment. The Svartifoss with its oddly regular columns and the Hundafoss are the two most famous waterfalls in the area.

#3: Blue Lagoon. The geothermal spa Blue Lagoon is one of the most iconic experiences in Iceland. It’s easily accessible and close to Reykjavik, which makes it a popular tourist destination. However, be warned: it’s a little expensive.

2#: Kirkjufell Mountain. This is basically the Matterhorn of Iceland. Along with Kirkjufellfoss, the waterfall, it is one of the most visited natural locations in Iceland. It’s pretty remote, but the good news is it’s only a two-hour drive from Reykjavik, so it’s a good day-trip from there.

#1: Reykjavik: The picturesque town of Reykjavik is Iceland’s biggest city, as well as its capital. It’s the most popular place to stay, and the start of the Golden Circle route. It’s a must-see not because of the scenery, but the convenience and proximity.