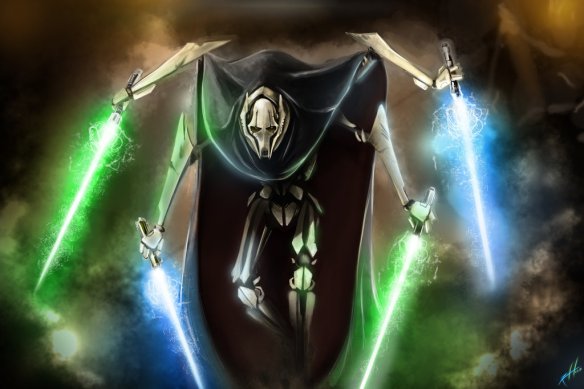 Many people complain about Boba Fett or Jango Fett dying too easily, but General Grievous died when Obi-Wan shot him with a standard blaster. It makes sense that after Obi-Wan cut his hands off, depriving him of his lightsabers, a blaster finished him off, but he was carrying a MagnaGuard staff when he got shot. Was he really taken off guard that much, and how could he be killed by a blaster if he’s a cyborg and can modify himself to be indestructible? Instead of explaining that, which a bit of research could probably do, I will just point out that Obi-Wan’s lightsaber wasn’t that far from becoming just another trophy in the clash of the generals. Which brings up the question:

What would have happened if General Grievous had killed Obi-Wan Kenobi in their duel in Revenge of the Sith?

Obi-Wan couldn’t have gone to Mustafar, and Anakin would have strangled Padme on the spot. Luke wouldn’t have been born, so Vader would have ruled unchallenged for a while (below the Emperor). Leia wasn’t born, so 3P0 and R2 wouldn’t have escaped with the Death Star Plans, and all those people in Rogue One would have died for nothing. Grand Moff Tarkin wouldn’t have died, and would blow up many more rebel planets with his Death Star that didn’t get destroyed.

Han and Chewie would remain smugglers and never become rebel heroes. Jabba would hire Boba to catch them and Han would become a decoration–permanently. Boba wouldn’t die in the Sarlacc pit.

Darth Vader would have no need for prosthetics as no one cut all his limbs off and burned him alive and would have become an even more powerful Sith. Since Luke wouldn’t thwart him and Obi-Wan is already dead, Yoda would have to come out of hiding and challenge him openly.

Yoda would kill Vader, because even with natural limbs Vader isn’t powerful or experienced enough to win, and from this point on there are a few ways the timeline could go:

Yoda might challenge the Emperor and lose, in which case the Emperor would find a new apprentice and the Sith would rule supreme over the Galaxy. Or, Yoda wins and helps the Alliance defeat the remaining bad guys and create a New Republic and New Jedi Order. The third possibility is that he doesn’t challenge the Emperor in the first place, but instead tries to raise more youngling Jedi and take on the Emperor with a team (maybe Ezra and Kanan, if they survive, or Ahsoka–we didn’t see her die, so she might be back).

If the timeline goes the third (and most likely) way, the New Jedi Order would probably not win if they attacked right away–we all saw the Emperor slaughter experienced Jedi Masters like Kit Fisto and Saesee Tinn. Yoda would need highly skilled Jedi, and that would take time. In the meanwhile, the Emperor would destroy the Alliance with the Death Star and hunt Yoda down, bringing the fight to him. In addition, he would probably train more Sith, bring Grievous along (he never died!), and recruit Maul (assuming he survives Star Wars: Rebels). That would give him a huge boost and make the fight fair.

So the final fight is Yoda, Ezra, Kanan and the New Jedi Order vs. the Emperor, Maul, Grievous and the New Sith Order. Who would win? Decide for yourself. 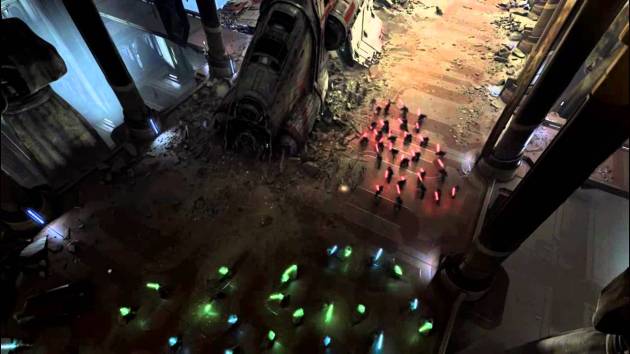