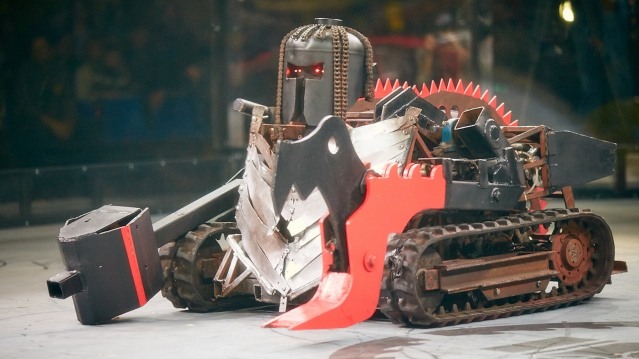 Remote control robot fighting is a strange but exciting hobby. Every robot is unique and loaded with weapons and features, and often takes years to build. The fights are short, intense, and satisfyingly violent, and many bots go down in a blaze of glory–sometimes literally–after only a few minutes in the ring.

When building one of these machines, many factors must be considered, such as ground clearance, stability, weight, speed, maneuverability, protection, and effective weapons. The rules to the competitions are mostly just common sense: no lasers, radioactivity, explosive projectiles, self-destruction, etc., so there are few limits to what can be done. Flamethrowers, chainsaws, and missiles are all part of the deal.

These are five of the best designs for fighting bots that I could find, considering results from real competitions, as well as the potential or theoretical effectiveness since these are design ideas, not specific bots.

Characterized by one powerful hammer on top, these are formidable bots loaded with power. They have a sturdy base with no weak points and one powerful arm on top. It can be loaded with a hammer, ax or saw, but whatever it is all the power in the robot is behind it for one lethal blow that will smash anything in its path.

Flippers, aka launchers, don’t have any flashy weapons like hammers or blades, but what they do have is just as effective. An entire section of the hull thrusts upward, hurling anything on it into the air. It is also used to flip itself up if it is turned upside down. The hydraulic motor responsible for the thrust is powerful enough to toss around just about any bot in the weight limit.

These scorpion-shaped bots grasp their victims with steel claws that can pierce the armor, and lower their “tails” to destroy them. The tail can be anything from a hammer to a saw to a spear, or anything else that can do damage. The power of the weapon is less dependent on the weight because it can use the enemy as balance, but even so, they are typically less powerful than hammerers. Nonetheless, by trapping its opponent in its claws, it ensures that it gets off multiple hits from the same angle, causing maximum damage with minimal effort.

While many are small, these are powerful bots. Their rotating blades or bars can reach speeds high enough to launch opponents into the air. Because they are flat, most can be driven upside down. Their strong armoring protects them from heavy weapons like hammers and axes, and their blades can rip up bots twice their size with a single hit.

These are one of the simplest types of fighting bots, but they do very good in battles. The key to their success is the speed of the cylinder and the durability. High-speed cylinders cause severe damage even on well-built robots and occasionally they even light others on fire with the sparks created by the friction of the cylinder against the opponent. Their flat, aerodynamic hulls optimize airflow and downforce so they are fast and stable. The weight of their armor is no disadvantage with a powerful motor, and it helps them stay on the ground and avoid getting tossed around by bigger bots. Most can take direct hits from heavy weaponry such as hammers. Many have no assigned top or bottom, so they are at no disadvantage when flipped upside down. Combined with a virtually indestructible body, these are dangerous bots with a good record.

What do you think? Which bot would you bet on? Do you have better ideas?